"Let us pause .................. the scene invites reflection. How many generations have passed away since the first possessor of the castle, watched from its heights as we do now, the glorious sun sinking to his rest; - how many suns have set, how many inhabitants of the castle have gone to their rest; - changing scenes flit over the imagination like optic illusions of fading pictures: - the royal standard; the banner of D'Albini, the pennon of Montalt, are proudly floating on the battlements, - prancing steeds are in the courtyard and the hall rings with the sound of festive revelry..."

William Taylor, "The History and Antiques of Castle Rising, Norfolk" 1850

Castle Rising Castle is one of the most famous 12th Century castles in England. The stone keep, built in around 1140ad, is amongst the finest surviving examples of its kind anywhere in the country and, together with the massive surrounding earthworks, ensures that Rising is a castle of national importance.

In its time Rising has served as a hunting lodge, royal residence, and for a brief time in the 18th century even housed a mental patient. The most famous period in its history was when it came to the mother of Edward III, Queen Isabella, following her part in the murder of her husband Edward II. The castle passed to the Howard family in 1544 and it remains in their hands today, the current owner being a descendant of William D'Albini II, the Norman baron who raised the castle.

The great earthworks which form the whole site and extent of the castle cover an area of between 12 and 13 acres, and comprise a main central enclose, or inner bailey, and two lesser outworks respectively to east and west. The central enclosure, in shape something between a circle and an oval about 73m north to south and 64m east to west, has a circumference around its crest of about 320m, and is far and away the strongest, with it banks, even now after the cumulative and combined effects of erosion and in-filling, rising to a height of some 18m.

Within the inner bailey can be found the remains of an early Norman Church. Discovered in the early nineteenth century when the bailey was cleared of accumulated sand and soil, it is the earliest building within the site, pre-dating even the castle itself. Dating from around the late eleventh century it is thought to be the first parish church of Rising (no earlier church has been discovered) and was probably replaced by the current twelfth-century church when the castle was founded. 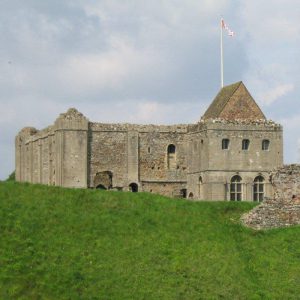 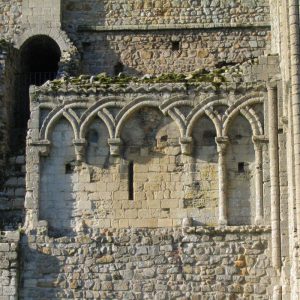 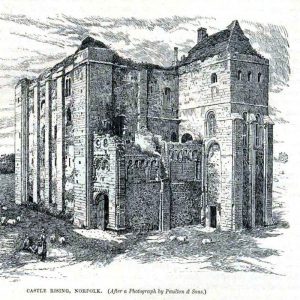 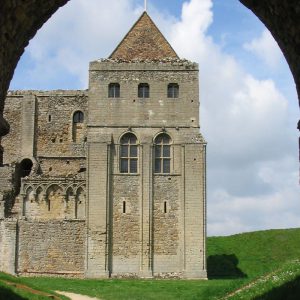